We want our interactions with you to be valuable. Share this with your team or take it with you. 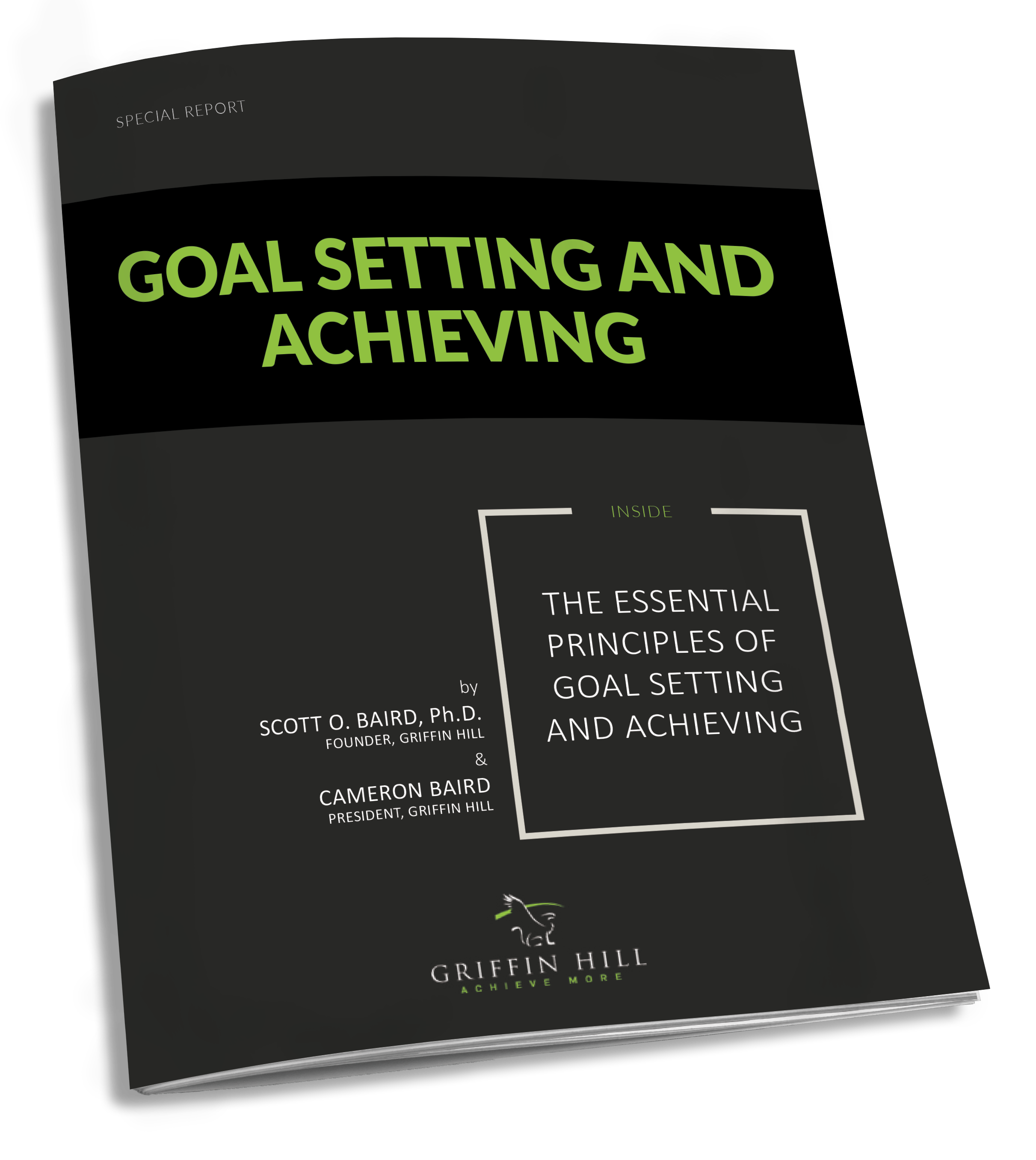 The Power and the Problem

Demonstrate interest in those you lead

Re-shape how you think

7 Steps to Master the principles and techniques

Goal Setting: The Power and the Problem

Holli H. was an Account Executive selling materials to manufacturers in a business-to-business environment. As an Account Executive, she didn’t have the same pressure for making phone calls to prospects and customers that a Business Development Representative (BDR) might have. Nevertheless, both Holli and her employer were aware of the importance of making regular phone calls.

Account Executives (AEs) in Holli’s company that initiated more frequent contact experienced more success. Holli took advantage of a goal-setting initiative and instruction to set a goal to increase her phone calls to customers and prospects from 8 each day to 10-12 calls a day. It was a simple goal. It didn’t take much effort. She used Griffin Hill’s Goal Achiever App to set the goal and evaluate it every day.

Holli was astonished when, in just one month, she doubled her commissions as a result of her simple goal. She was excited to pay off some debts and she was thrilled with what she learned about goal setting and achieving.

Science tells us that teaching the principles of goal setting and achieving to those we lead will pay huge dividends. Helping those we lead to master the principles and techniques of goal setting and achieving helps them to be more engaged and more productive at work. Goal setters experience more hope and optimism, and they enjoy higher levels of emotional resilience.

Those who set goals are like the pea pods in Vilfredo Pareto’s garden. Goal setters simply achieve more. 80% of goal-setters report they keep goals in their minds but do not write them. People with unwritten goals outperform their peers of equal ability who do not set goals. But that small percent of goal-setters who write their goals, outperform other goal setters by a whopping 42%!

If goal-setters outperform their peers of equal ability, are more engaged and productive at work, experience more hope and optimism, and enjoy higher levels of emotional resilience, where is the problem???

The problem is that the vast majority of adults no longer engage in goal-setting and achieving behavior. Furthermore, evidence demonstrates managers who set goals for their team are largely ineffective. As a result, goal behavior is at an all-time low—leaving the majority of the workforce unengaged, lacking direction, living without passion, and subject to discouragement and disillusion.

Even though 80% of business leaders claim to set goals that are specific, measurable, and limited in number, only 33% of their employees can name their employer’s priorities, and only 16% understand the connection between their work goals and corporate strategies.

No wonder the Gallup organization is telling us that fully 70-85 percent of the global workforce is not engaged. They claim this pall of poor performance is the result of weak leadership and inept management.

The evidence is clear, the jury is in—the vast majority of adults, including most business leaders, have not mastered the principles and techniques of setting and achieving goals. Poor goal behavior results in underperforming workers and effective leaders.

Don’t Despair: You can lead your team out of the confusing fog of goal setting and achieving misinformation. You can Help Your People Grow, Improve, and Perform

Our nation was built on the vision, commitment, and hard work of pioneering goal setters and achievers. Their hopes and dreams led to the establishment of colonies, cities, and states. Pioneer persistence spurred the push westward. They established farms, ranches, and businesses—enterprises that embodied their optimism. They had goals, and they made plans to achieve them.

You did the same. You had vision and dreams and worked hard to achieve them. That is why you are the leader you are. You may think that goal setting and achieving comes naturally—it did to you. But it doesn’t come naturally to most people, including members of your very own team.

Because goal setting and achieving don’t come naturally to your team, you have an opportunity to shape their lives for the better. You can shape the future of every member of your team by teaching them the principles and techniques of goal setting and achieving. Leaders teach. When you teach correct principles, your people can govern themselves to better goal behavior.

Because goal setting and achieving come naturally to many executives, they are unconsciously competent. They are very skilled at personal goal behavior but uncertain how to effectively teach the principles and techniques to others. This instructional content may help (LINK) you can use it to educate your team. You can use it to create your own lessons or you can share the content and then have a team discussion about the content. Don’t let lack of preparation time or low confidence keep you from teaching goal-setting principles and techniques to your team!

As a natural goal setter, it is highly likely that you are unconsciously competent. Dissecting and teaching these principles to others may not be easy. It might be helpful to watch the content on goal setting and achieving that I produced for Griffin Hill. After watching the content, you can decide if you want to teach it to yourself, or if you want your team to get a Griffin Hill Insider Membership (my free gift to you), that includes our Goal Setting and Achieving content. The Insider Membership also has the Griffin Hill Goal Achiever App.

Demonstrate interest in those you lead by helping them to set and achieve personal and work-related goals.

When you go to the effort to teach your people about goal setting, you show interest in them and their well-being. When your people know that you care about their circumstances, it cultivates loyalty and commitment. The result is higher levels of engagement, productivity, and work satisfaction.

Thomas Gilbert wrote the book on Human Competence. Among the heady gems in its pages, Gilbert boldly proclaims, “mistakes in decisions about goals is the single greatest cause of human incompetence.”

William Jennings Bryan was a motivator and politician in the late 19th and early 20th centuries. He was his party’s candidate for president three different times. Known for his prowess as an orator, it is no wonder that he contributes useful ideas to human growth and progression. Here is one selection.

The destiny Mr. Bryan speaks of is that of a better life and a hopeful situation brought about by capturing our desires and harnessing them by using the principles of goal setting and achieving.

Beryl Markham was a female adventurer, aviator, and author. In her book, West With the Night, she makes this remarkable observation.

“If a man has any greatness in him, it comes to light, not in one flamboyant hour but in the daily ledger of his work.”

A female author, Ms Markham might be forgiven for her use of the male pronoun—it was the common writing style at the time her book was published in the 1940s. Her contribution to our pithy quotes helps us to remember that goal setting and achieving are the result of daily measured effort. It is the aggregation of incremental improvement that leads to great achievement.

M. Russell Ballard is a business leader, entrepreneur, and religious leader. His contribution focuses our attention on the mastery of principles and techniques of setting and achieving our goals.

I am so thoroughly convinced that if we don’t set goals in our life and learn how to master the techniques of living to reach our goals, we can reach a ripe old age and look back on our life only to see that we reached but a small part of our full potential.

When one learns to master the principles of setting a goal, he will then be able to make a great difference in the results he attains in this life.

Looking back on our lives, without having reached our full potential would certainly be a cause for regret. With regard to goal setting and achieving, we all live with pain—either the pain of effort or the pain of regret.

Avoid the trap laid by the well-intentioned but uninformed, which says you can’t set goals for things you don’t directly control. In a discussion with a group of CEOs, they were equally split on whether setting goals for sales and revenue were reasonable and effective. Some argued that because the buying decision of any given prospect isn’t directly in the control of a salesperson, setting a goal for closing was not helpful and bordered on psychological malpractice. Nonsense! These executives simply don’t understand that ENDS goals (goals that may not be in their direct control) represent the hopes, desires, and wishes toward which a salesperson strives. MEANS goals (activities that ARE in their direct control) stack the odds of success in their favor. Lack of understanding of the principles of ENDS goals and MEANS goals is a mistake that leads to performance incompetence!

If you want to elevate the competence and performance of your team consider some of the principles from the Griffin Hill SMARTER goals.

You know all about SMART goals. But the competence of your team will be enhanced by learning about Griffin Hill’s SMARTER goals. We share a handful of concepts that cannot be found anywhere else!

Griffin Hill’s SMARTER goals is an approach that adds gravitas to goal setting and achieving. The instructional video makes it easier for leaders to teach and develop goal setting and achieving to the people they lead. Some leaders prefer to watch the content and then teach the principles themselves. Others find it easier to have their team members get a free Griffin Hill Insider Membership that includes the goal-setting content as well as the Goal Achiever App. By inviting every team member to study the content in advance, the leader can initiate a discussion where every team member contributes their best ideas based on the goal-setting instruction.

The app is important because those who write their goals achieve more than those who simply formulate them in their own mind.

(graphic Gail Matthews, 2015, those who write goals achieve 33% more than those who simply formulate them in their mind.)

The SMART goal acronym is familiar to CEOs and business leaders. Griffin Hill’s SMARTER goals add important concepts to goal setting and achieving that are not found anywhere else. Here are some of those concepts:

Unless the goal is set too high. When goals are too high, the goal setter may quit before they ever start.

When leaders implement these and other Griffin Hill principles of goal setting and achieving, they elevate performance in the near term and they shape the leaders of the future.

I am confident these ideas can lead to greater levels of competence and performance results for your team!

Ready to Collaborate? Get in Touch